Once that’s done you’ll be able to experience the Michael McDowell website perfectly.
BACK TO TOP
BACK
28/09/2022 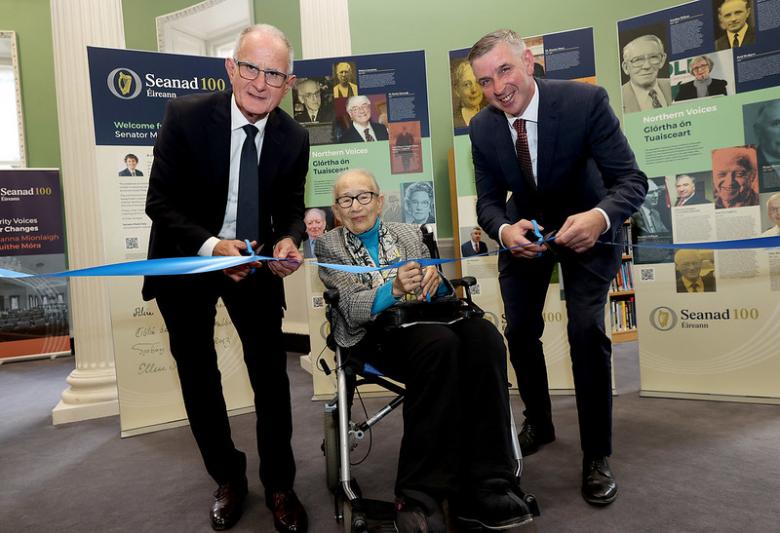 It’s a pleasure to join you today for the unveiling of this exhibition on Northern Voices in the Seanad.

In 2018 I went in with the intention to understand, to listen, to learn and quite simply to be ‘a unionist voice’ in the Seanad and not the ‘voice for unionism’ in the Seanad.

Having had no knowledge of the Oireachtas and having to use Google Maps to see where LH was!

But this is not uncommon. Many in NI have absolutely no knowledge of anything south of the border. There’s a frightening level of misunderstanding between Belfast and Dublin, and Dublin and Belfast.

When I was elected to the Seanad I was told that it was ‘A cold house for unionism….’

Undoubtedly there were people who didn’t want to see northern voices here but many ,many more who did.

I made lifelong friends and allies, and colleagues who I could trust and depend on at any time.

And I would extend that friendship to the ushers and security staff, to the SA’s and PA’s, to the kitchen staff and bar staff. Because that is where the power lies in this building. The all-knowing, all seeing, all hearing staff are the constant, and are the beating heart of this establishment. They know everything and say nothing, and keep the machinery of government turning on a daily basis.

I learnt that relationships are not built solely on meetings. If you want to build relationships and understand people, their thoughts, their feelings, and their sensitivities you have to meet them, talk to them, engage with them and work with them.

I also learnt that its more important to listen than to talk. Although I’m pretty good at talking!

As Peter Drucker said ‘The most important thing in communication is hearing what isn’t said!’

And if people don’t understand you. Maybe they’re not listening.

I learnt about the Irish Language and its connection to my culture. I learnt that not as many people could speak it as I once thought, exemplified by a conversation I had in the LH canteen one lunchtime………..

I learnt that the Irish language presented no threat to me, or anyone for that matter. It’s in the history and culture and the DNA of this place.

More than anything I learnt the importance of building relationships and building trust and respect. Trust and respect that takes time to build but can be lost in an instant

For me. The Seanad was a platform, from which I could open doors and open minds

When I was elected, I wasn’t the only Northern Voice. NO’D was already a northern voice.

Another northern voice with slightly different politics to mine! However, at all times we could respectfully agree to disagree with elements of each other’s politics, whilst maintaining a healthy engagement.

There’s currently some conversation about the benefits of more Northern voices in the Seanad. But for myself there’s a fundamental problem. This would be a pointless exercise in the absence of Seanad reform.

In fact, a confident strong lower house should have nothing to fear with an upper house ‘with teeth’

It actually makes for better government. And even though reform ambitions have been thwarted to date, I think there should be a renewed effort to consider Seanad reform. I think reform should consider a number of points;

Northern voices have added to the value of the Seanad and can further add value in the future.

However, a note of caution.  Sometimes I could see situations where issues in NI were genuinely important and of concern to many people north of the border, and were picked up here and highlighted, not, I might add, to propose solutions, but rather to take advantage of the political capitol that the situation presented.

Something that most certainly has the potential to damage relations rather than strengthen them!

The function and the importance of the Seanad should not be understated.

Often misunderstood and often misrepresented. It plays a critical role in scrutinising, interrogating and improving legislation before its sent back to a lower house.

It should take debate and engagement to another level outside the charged and often toxic politics of the Dail.

It is a compliment to the Dail, and should be seen as such.

For myself the Seanad was about intelligent debate, about challenging arguments and informed conversation. It was about listening and learning, and about showing respect to others.

It wasn’t about great speeches in the chamber, but was actually more often about the conversations and clandestine meetings in the corridors of LH, the canteen, or the dining room. About the breakfast conversation in Buswells, or the brief passing encounter on the plinth.

But mostly the Seanad was about building bridges, about uniting people, and was about opening doors and opening minds!"

Respect and Loyalty for the Forgotten address at Glasnevin Cemetery

What do me mean by Irish unity? How could it come about?